What Is A Cozy Mystery? 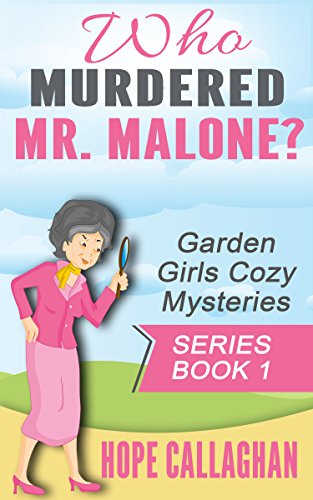 Wikipedia defines "Cozy Mysteries" as simply being referred to as "cozies", a subgenre of crime fiction in which sex and violence are downplayed or treated humorously, and the crime and detection take place in a small, socially intimate community. The detectives in such stories are nearly always amateurs.
That's why I like "cozies", it's more about the one doing the detection and crime, rather than the sex and violence.
Some authors tend to make the police inept or silly, but there are some who incorporate their police relationship into the story such as Hope Callahan's series "Garden Girls Christian Cozy Mystery". Gloria Rutherford is a widow who inadvertently solves a crime that put her in touch with the policeman of her small Michigan town. The first few books build on the meeting until they fall in love and help each other solve crimes, along with her friends of the "Garden Club". One of the reasons I like this series is that the stories are realistic, in other words, I could be involved as this could happen in Center Point. Hope has several series, "The Cruise Ship Mysteries "; Millie a sixty plus year old woman,  newly divorced and a cousin of Gloria, from the Garden Club Series. Millie is out to prove that her ex was wrong not to include her in their business, investigations. She's now an assistant cruise director and has already been involved in a mystery and helped solve it.
As I mentioned HERE, M. C. Beaton and her Agatha Raisin series is a great favorite of mine, especially now that the book has been made into a British TV series. A middle aged former public relation business owner, who has sold her business and taken early retirement; she's moved from London, a busy city, to a Cotswold village. She tries to fit into the quiet lifestyle and becomes something of an amateur sleuth. What I love about Agatha is that I can relate to her rising from the slums of Birmingham, England, putting herself through business school, proving herself to her boss, who helps her, financially, set up her business; then when she retires to a small community, she discovers that she's spent a good part of her life working and now is faced with a totally different culture. She never was one to help with the church women's guild, helping to raise money, learning that some of the biggest problems arise from taking an elderly, pessimistic couple on an outing to relieve the boredom of their daily life. Each book shows her growth in this area, while in other areas she keeps making the same mistakes, such as her obsession with James, her neighbor.
Another good author is also American like Hope Callahan. Elizabeth Spann Craig has three series, one she writes under the name of Riley Adams, The Memphis Barbecue series.  One of my favorites from the "Memphis Barbecue"  series is "Finger Lickin Dead".  The Myrtle Clover series is about an 80 plus year old woman from North Carolina, who with her sidekicks, try to solve mysteries; if they can do it before her police chief son, she's very happy.
Over the coming weeks, I'll spotlight more of my favorites and some new ones too.

I have given up on detective stories but they feature in the action stories that I am now reading.

Other Blogs by Judy